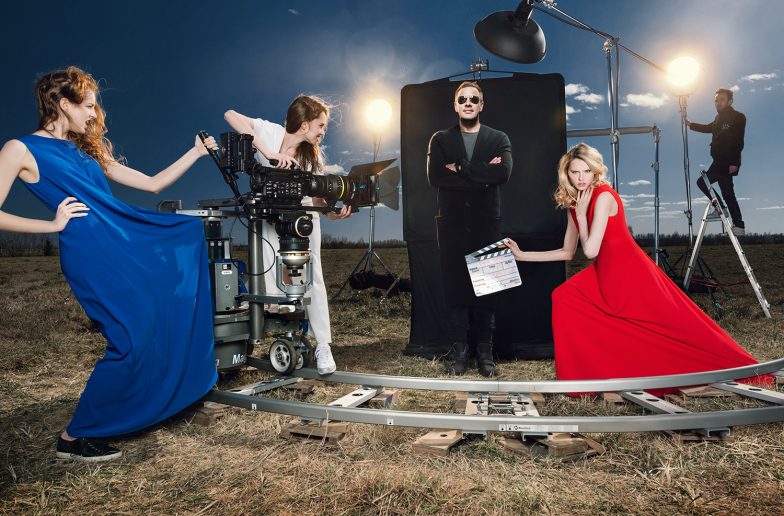 Andy Fiord, president and art-director of Andy Fiord Fashion Advertising, became the winner of the “Top 50. The most famous people of St. Petersburg” awards!

Each year Sobaka magazine holds an open vote for the nominees in the “Top 50” awards.

Among them: artists, movie and theatre stars, fashion-industry representatives, musicians, writers, businessmen, scientists, art historians and athletes who have reached the highest professional success this year.

In his interview for the June issue of Sobaka magazine Andy Fiord told about his entrepreneur and astronomer careers, passion for fashion photography and the creation of fashion-business in Russia.

Andy Fiord — the president of Andy Fiord Fashion Advertising, in the past an astrophysicist, an R&D manager, an owner of a high tech business and a fashion photographer, has created a successful fashion branding company that includes a European-level modeling agency.

On the astronomer career

At ten, I had a dream about being in outer space and feeling incredibly free and happy there. Waking up, I knew I no longer wanted to be a troublemaker and decided to become an astronomer. My first scholarly publications in The Astrophysical Journal – a respected American magazine – concerned the physics of sunspots and came about when I was seventeen. Thereafter, I worked as an astrophysicist at the Pulkovo Observatory and defended my first post-grad degree thesis.

On the big boss career

At the age of twenty-six, I was the youngest First Deputy Director of a military & space company in the country. The Elektron Scientific Production Association employed some fifteen thousand people working on space-based observation systems. Nowadays models tell one another that I supposedly invented the lens, although the history of that invention goes back thousands of years, and Galileo Galilei did quite a good job building the telescope as early as 1609. What I am driving at is that my vanity has been satisfied long time ago, so now I can skip the glitz and focus on my own project instead.

On the entrepreneur career

My nuclear physics and astrophysics technology company developed the world’s most sensitive digital camera for a nitrogen cryostat telescope, using advancements in different areas and making them work together. It could take especially cool pictures of the galaxy, so the University of Cambridge acquired it.

On the photographer career

I took my first photograph when I was thirteen: attached a camera to the telescope (which I assembled with my own hands) and shot the moon. Back then I attended the legendary Youth Astronomical School and even gave lectures at the Planetarium. This is how I earned my first paycheck, which I spent on a Zenit camera. I made my second and more serious foray into photography as a more or less self-made man, when I retired from active management of my business, began traveling and making postcard-type landscape shots of landscapes, including my favorite Lake Ladoga skerries.

In the winter, when Ladoga froze over, I got bored without my new hobby and started shooting portraits. I studied the theory of painting, bought the necessary photo equipment, used to spend an entire day on a single shot. And at one fine moment I said to myself: “Okay, I’ve been a scientist and a businessman, now I will become an awesome photographer”. So for two years I practiced with objects and lighting in my studio, six days a week, twelve hours a day, studied Vogue and got blazed with Steven Meisel’s work.

My first experience in fashion photography was a model test a photographer friend of mine offered me for practice. I got a hundred dollars for it from the model. I was really embarrassed because it was big money for that young lady. I got that bill framed and hanging on the wall, and I tell my financial director: “It’s more awesome than our entire annual profit”.

Fashion photo struck me as the most synthetic: it includes portrait and psychology as well as working with objects and the art of color. Precisely what I love as a mathematician and physicist: building a system in which all parts interact. Six years after my first attempts with the picturesque Ladoga rocks, I was getting orders for fashion shooting from gloss magazines ranging from Inflight Review to Vogue, for which I shot Nacho Duato. At the time no one knew I came to photography from business, I was careful to hide that because otherwise it would have been unfair.

In 2010, even having a whole bunch of orders as a photographer, I longed for some people groove: after all, I have always been an active teambuilder. I came up with the idea of combining my newfangled fashion photographer experience with my business past, creating this cool photo production company, Andy Fiord Studio. We scripted the processes, selected line producers and photographers, assistants had to pass my tests.

Immediately, we landed a big project for Condé Nast, shooting ballet- and fashion-themed editorials with New York photographers. As a producer, I worked for Russian editions of Interview, Harper’s Bazaar, GQ, Elle.

And last year, forty-two percent of photo production orders came in from abroad: after a month of shooting for Burberry on location in Moscow, Almaty, Tbilisi, Kiev, Baku, Yerevan (we were then doing a project called Art of the Trench with Svetlana Bondarchuk, Nikolay Uskov, Miroslava Duma and other media entities) now we often get business from London. Patrick Demarchelier, which whom we did six shootings in five days, called us of the best teams in the world.

Now I have decided to concentrate entirely on this business and create a big, full cycle fashion branding company. AFFA creates a ready advertising product, from the concept to events and PR campaigns. We focus on large corporate customers, not exclusively within the fashion industry: we have banks, telecoms and automotive corporations in our portfolio.

On the modeling business

In 2011, I founded the Andy Fiord Models agency so that Western clients could learn of my brand. Last year, the LMA agency – my old friends, much loved and very talented Sergey Lukovsky and Sasha Nagorny – merged with us. Now everything works like a factory: on average, seventy models work abroad each day on good contracts; two seasons back, we already had one hundred seventy walks during the European fashion weeks; every major show features one or more of our models; and Vasilisa Pavlova and Katya Ryabinkina have made it to the world’s Top Ten. At the same time, we are the only modeling agency holding parents’ meetings. We are serious about taking care of our models – for example, we may terminate a contract with such giants as Women or IMG, if we don’t like the conditions in which our young ladies are supposed to work.

On the present and future

AFFA has three dozen employees. The production team shares the office with my first company, whilst our modeling agencies now reside together in the Etagi. We get a nice team mixing dynamic and democratic atmosphere of in the spirit of good old funk.

The management team developing astrophysical equipment are all older than me, but my transformation into the fashionable Andy Fiord and the presence of youthful models somehow rejuvenated them.

I am a late child of two beautiful and intelligent people, a military officer and a doctor. My childhood was full of kindness and light, and I’m used to feel greatly loved. Now I choose for my team such people whom I could also love. For me, love is the most important, and the opportunity to give it is the sole meaning of life.